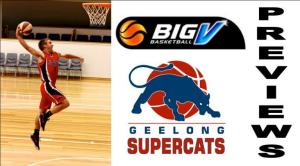 Early signs in the new era for Geelong’s senior Big V men’s team are promising after the Supercats opened the 2012 season with a comfortable 90-71 result against Chelsea. Despite trailing at half-time, and missing former Ballarat SEABL star Brett Goodgame, Shayne Bow’s charges started their championship defence in the right fashion. Guard duo Dane Bow (23 points) and Chris Daniele (20) relished the extra responsibility, with Bow particularly impressive going 5-7 from beyond the arc. Former SEABL Supercat Matt Hardiman was also crucial with 16 points, 12 rebounds, four assists and two steals. Clashes between Geelong and Altona are notoriously tough match-ups, and despite the new personnel on the Supercats’ roster this one shouldn’t be any different.

Geelong has been quick to put last week’s surprise loss to Chelsea behind them, with focus turning to Sunday’s conference clash with championship favourites Altona. In their return to Big V competition the Supercats shot a woeful 25.3 per cent from the field against the Gulls and a similar performance against the Gators on Sunday will result in a wider margin. Altona is the talk of the Division One competition after signing former junior and Canberra WNBL player Brigette Ardossi. Limiting her influence will go a long way to helping Geelong open its 2012 account. Veteran guard Jae Conn, who finished with 10 points, nine rebounds and seven assists last week in a welcome return to a Geelong uniform after spending 2011 playing netball, needs more help offensively.

After having few problems in putting away Werribee last week, Geelong faces a challenging double-header this weekend. The Supercats should have no problem with Bulleen on the road on Saturday night. However, a clash with the powerful Diamond Valley on Sunday will be an early indication of where they stand in the SYC1M pecking order. “These two games will show us how we are travelling and help set up the rest of the season,” coach Luke Beauglehall said. SEABL rookies Michael Rebula, Matthew Vale and Emerson Varley all had an influence in the win over the Devils, and along with Lewis Varley, will need to be top of their game if they’re to spring a surprise against the Eagles.

Scoring and rebounding will be the key focus for the Young Lady Supercats in their road-home double-header match-up with Melbourne and Diamond Valley this weekend. Geelong is coming off a 48-43 loss to Bulleen to open its 2012 campaign. “We simply gave up too many offensive rebounds and did not score enough points,” coach Grantley Bernard said. The Young Lady Supercats were smashed on the glass 49-32, with the Boomers pulling down 15 from their own shots. Geelong not only shot poorly from the field (23.3 per cent), but were a less than impressive 11-23 from the free-throw line. Despite the loss, Bernard is backing his girls to find form this weekend. “I think the group will respond in the right way,” he said.