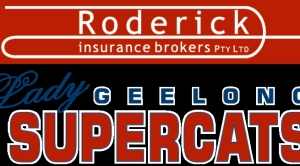 “The partnership between Roderick Insurance Brokers and the Geelong Lady Supercats came about because Keith Roderick recognised the importance of supporting the development of women in sport, and this team represents Geelong in a national competition.

“The Supercats club appreciates the support that Roderick Insurance Brokers afford the club by taking up a twelve month naming rights partnership with our women’s SEABL team” said David Hoey.

Roderick Insurance Brokers owner and former chairman of the Geelong Supercats, Keith Roderick, said that he wanted to do more for the women’s program after stepping down from the board late last year.

“I am delighted to be taking on the naming rights of the Geelong Lady Supercats. I think it is tremendous that we have ladies playing at this level, to give all the aspiring young girls the same as we have the boys is fantastic. Plus they put on a great show!” said Mr Roderick.

Now to be known as the Roderick Geelong Lady Supercats, the team is looking to improve on their impressive 2011 debut season in the South East Australian Basketball League.

With just a few minor changes, the team is feeling ready for the start of the SEABL season in just over four weeks. Having already announced the return of players Candice Rogers, Anna Teague, Cortney Williamson, Clare Ralph, Caitlin Shadbolt and Jess Watson as well as captain Kylie Morrissy and WNBL player Deanna Smith, the core group who finished the season with 11 wins and 13 losses retains a good level stability. Added to this are star young players Grace Parker and Madeline White, as well as the currently injured Emily Koroneos, who replace Alex Sheedy and Ellie Stevens from the 2011 roster.

A few weeks ago it was announced that Canadian import Chelsea Aubry would not be re-signing with the Lady Supercats as she will return home after her WNBL season in preparation for the 2012 London Olympics with Canada.

Head Coach Paul O’Brien has been working feverishly to sign a replacement for Aubry, and the Roderick Geelong Lady Supercats are pleased to announce that American Abby Schrader will join the club for the 2012 SEABL season.

The 191cm centre last played in SEABL for the Kilsyth Cobras in 2007, where she averaged 23ppg and 11.5ppg.
In 2011 Abby played in the NSW Waratah league for Manly, and was signed to the Sydney University Flames in the WNBL as an injury replacement player for Eva Afeaki.

Since graduating from the University of Maine in 2006 where she averaged 11.3ppg and 7.9rpg in her senior year, the 27 year old Scrader has played in Denmark, Sweden and Australia, as well as spending time coaching and even receiving a Coaching Staff Sportsmen of the Year award.

Abby is looking forward to joining the Lady Supercats at the conclusion of the WNBL season.

“I’m really excited to have this opportunity and to be in Victoria, playing SEABL again. I’m very much looking forward to getting on the court with the girls and the coaches and being part of the sporting community in Geelong.”

Paul O’Brien had this to say about his newest recruit, “I’ve known Abby for a number of years, and I think what Abby will bring to the program is that she has a very clear idea of where she wants her career to go. She’s a very talented inside/outside power forward/centre and by adding Abby to the mix we will have a very good front line alongside Caitlin Shadbolt, Candice Rogers, Clare Ralph and young Grace Parker.

“I think Abby will come in and make an immediate impact, she is very strong rebounder and potential scorer and one of her greatest strengths is that she is very team focused. She will fit in really well with the girls we have here, and the people of Geelong are really going to warm to her. We’re hopeful that this won’t be just a one year type situation, the Geelong program is one where we like to retain players and build on that relationship.”

Abby will join the Geelong Lady Supercats at the conclusion of the WNBL season.