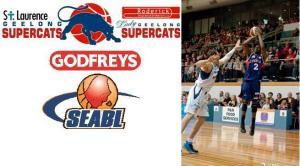 The St Laurence Geelong Supercats got off to a good start but lost momentum in the second quarter. They came back after the main break determined to get back into the game, and kept the scores close up until three quarter time. The final quarter saw the Supercats break away and run over the Chargers in a convincing win.

Kimmani Barrett was again sensational for the Supercats, top scoring with 21 points despite only playing 21 minutes, while big man Seb Loader finished with a double double (11 points and 11 rebounds) matching up against 7’3″ Sam Harris.

Nick Owusu and Theron Wilson both finished with 18 points, with Owusu only one rebounds off getting a double double himself.

The boys have a tough double coming up this weekend, with the always difficult Mt Gambier road trip on Friday night and then having to back it up again at home on Saturday night against the Sandrigham Sabres who are currently 3-0.

The Roderick Geelong Supercats fought a close match all game, matching up with the Hobart Lady Chargers and playing some great defense. The game came down to the final 20 seconds with scores being tied at 60 apiece before point guard Cortney Williamson hit a 3 pointer to put the Lady Supercats in front. A late foul on Candice Rogers put the Lady Supercats at the line and Rogers sank both free throws to ice the 5 point victory.

Tickets for this Saturday night’s home game against the Sabres are available online now, we look forward to seeing another fantastic crowd at the Geelong Arena!