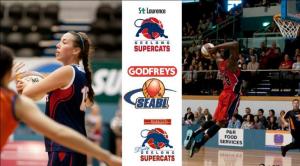 The St Laurence Geelong Supercats suffered their first loss of 2012 on the road in Overtime on Saturday night. Without captain Jamie Medved, David Mecanovic saw more court time and put in a fantastic effort despite the loss. Import duo Theron Wilson and Kimmani Barrett were again impressive, with Barrett picking up another double double, but a sluggish second quarter saw the Sabres take a commanding lead over the visiting side. The Supercats fought back in the final term to push the game into overtime, but were eventually defeated by Sandringham by just 4 points.

Missing Deanna Smith, Kylie Morrissy, Cortney Williamson and Maddie White, the Roderick Geelong Lady Supercats dropped their second game of the 2012 season against Sandringham. Turnovers were a crucial part of the loss on Saturday night and the girls are determined to come back and defend their home court against Launceston this weekend – a team they beat four weeks ago.

Out to prove a point after a disappointing loss the night before, the Supercats came out firing against Mt Gambier and never lost the lead. Kimmani Barrett was the leading scorer for Geelong with 28 points, while Theron Wilson added 24 and David Mecanovic continued his impressive form, adding 16 points of his own. But it was “Wildcard” Keith Harrison who cemented the win for the Supercats, coming on and nailing 3 three pointers to put a nail in Mt Gambier’s come back late in the game.

Both teams return home to the Geelong Arena this Saturday night, with the Roderick Geelong Lady Supercats taking on the Launceston Tornadoes at 5.30pm followed by the St Laurence Geelong Supercats hosting the North West Tasmania Thunder at 7.30pm.