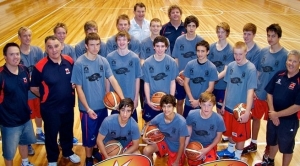 Both George and Taylor have participated in the Aspiring Supercats Program (ASP) for the last two years and over the last 3 months they have been training with the SEABL Men’s team under the direction of Head Coach Jamie O’Loughlin.

“Both boys were strong performers in the ASP and due to that we invited them to join our off season practice sessions with the Men. They performed well and we have kept them with us for the pre-season now as well. I feel they have adjusted really well to playing against the bigger bodies in our sessions and this has no doubt helped them to progress quickly and prepare for the state trials. The reports I have had back about the boys at Country Cup and the trials have been glowing, I really happy for them to be selected, it’s going to be a big year for them both.”

Blagojevic and Dow also play in the Supercats U18 team in the VJBL and in the Basketball Geelong U18A competition where they play for Christian College Eagles.

A third ASP member Ashish Motiani has also been selected to the squad as an emergency after just missing out on a place in the team. Motiani plays in the same Supercats U18 team as Blagojevic and Dow and plays in the Basketball Geelong U18A competition for YMCA.

The 193cm forward has been in pre-season training with the Lady Supercats under head coach Paul O’Brien since October.

The Geelong Supercats congratulate these players on their selection in the Victoria Country Under 18 representative sides and wish them the best of luck at the Australian U18 Basketball Championships in April!